A close look at an operating botnet

For those that don’t know, a botnet is a network of hacked computers that somehow connect back to a command and control server which instructs the network to conduct malicious activities like DDOS attacks, phishing, or spam.

This past summer, I decided to set up a honey pot server. I hadn’t done something like that before and I was curious to see what would show up.

I set up a fresh Digital Ocean instance and installed a vulnerability that could be remotely exploited. I choose to use the shellshock bug and installed an older version of bash. Shellshock was a vulnerability in Bash that would execute code in a environment variable. This can easily be exploited remotely because of how CGI web servers pass arguments through environment variables.

After installing Bash 4.2, I set up an Apache web server to serve CGI. So common URL’s and 404’s would all map to one simple, shellshock-vulnerable script:

Functionally the script just returns a text page saying hi to whatever the user agent string was. But if an HTTP request were to look something like this:

Then Bash 4.2 will execute the code in the User-Agent string, which downloads a Perl script, ex, and runs it.

This after leaving the server running for a couple months, that is exactly what happened.

To summarize the Perl script, it’s about 500 lines, connects to a server, wileful.com, and listens for commands. Some of the commands it looks for include tcpflood, eval, and shell. This looks like functionality for a botnet bot.

It also implements some stealth. Upon running the program, it immediately forks a /usr/sbin/httpd process, overwrites it with the Perl process using exec, and detaches from the parent process so it can run independently in the background.

So you won’t be able to see a new perl process running. Instead, a new /usr/sbin/httpd process will be running.

If you check the CPU usage of processes, however, /usr/sbin/httpd sticks out like a sore thumb because it polls the server socket with no timeout after it connects. This spins the CPU (oops).

Some of you may immediately recognize this as IRC. This botnet seems kind of old school: no SSL and controlled over IRC.

Well it looks like I have a username, password, and server address. Why don’t I try logging into the botnet with a regular IRC client?

I fired up another docker instance, Weechat, and a tor proxy. After connecting to irc://GNU:[email protected]:443, this is what I saw:

Wow, there’s a total of 977 connected ‘users’ and 6 different channels. As seen from tcpdump, my bot was instructed to join channel #113 so I figured I would do the same: 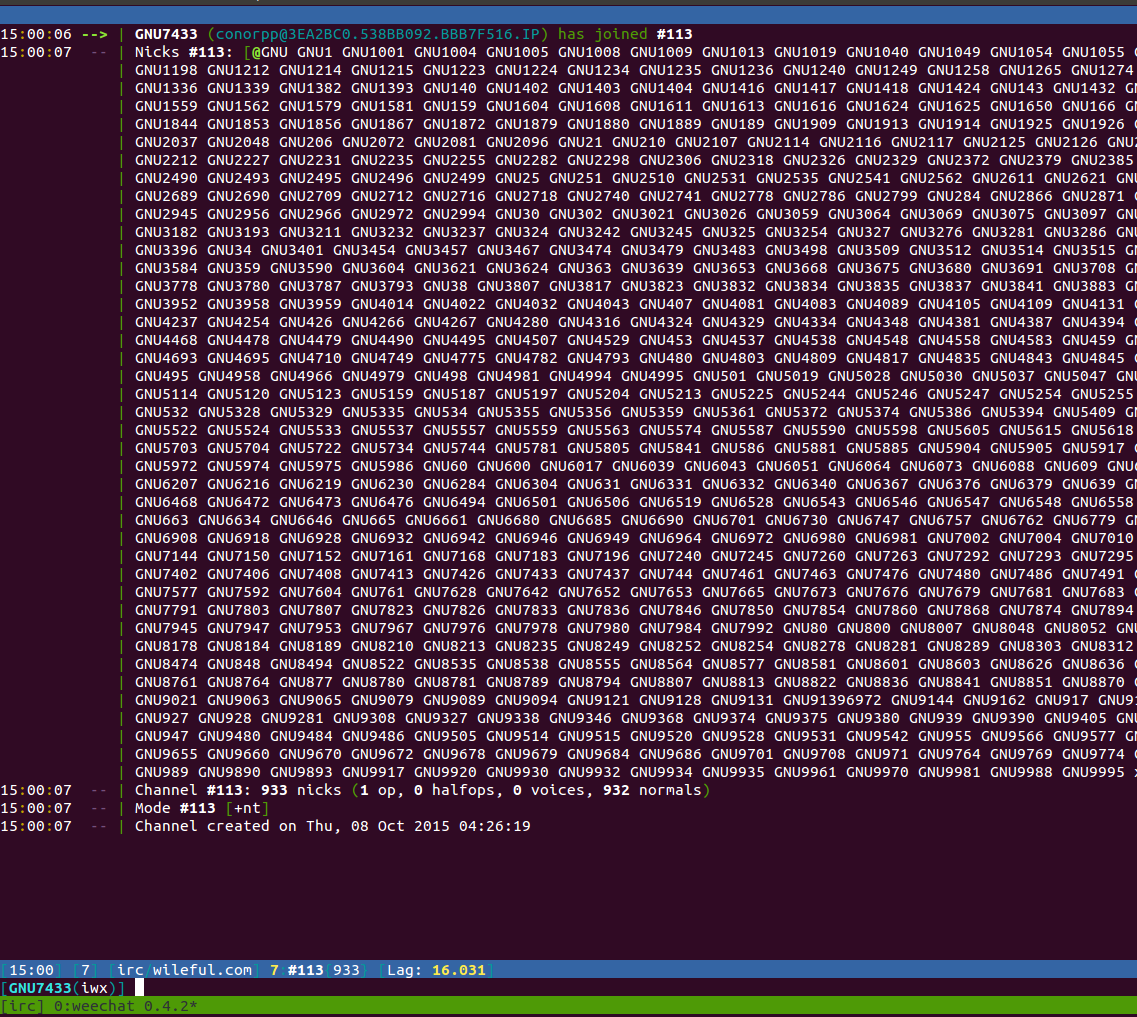 Either all 932 clients in the channel are pretty unoriginal when coming up with a nick or the bots are assigned a nick formatted like GNU<ID>. Everyone is really shy too, because no one says anything. After idling in the channel for a few minutes, this is all to be seen:

Looks like bots are actively leaving and joining. I suspect that the operaters were moving around the bots or were continually exploiting shellshock vulnerable machines like my honey pot.

I wanted to see if I could send commands to the botnet since I had access to the channels, but after a couple hours of unfurling the perl script, I discovered that it authenticates commands based on the servername and nickname in the IRC message. I could not spoof this since it was something only an operator on the IRC network could do.

Back to the infected honey pot

I let my infected honey pot run for a few days and I checked out the IRC tranactions in the pcap logs. On intervals it would do the following:

This is probably for phishing attacks or spam. No DOS attacks.

I didn’t want my honey pot to be contributing to illegal activities, so I shut it down.

It wasn’t long before I couldn’t log in to the IRC network on wileful.com.

At first I thought I got locked out, but after scanning it from multiple different IP addresses I never used before, it was still unresponsive. I suspect that the botnet moved to another server or stopped accepting new connections.

My setup for the honey pot and my results from this analysis can be found here. If you have any similar experience with this or know more, please send me a message. I’d like to learn more.